Albania, main actor of the second Testing Lab of the BLUE DEAL project 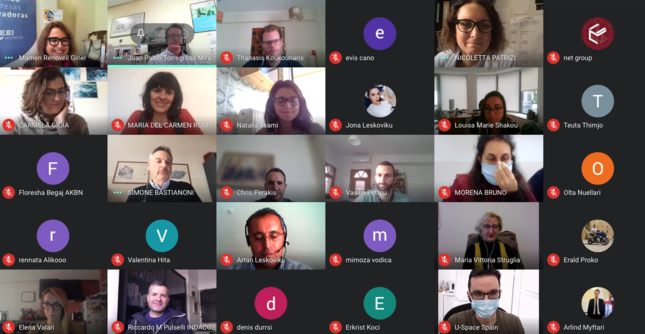 For two days and in a virtual way, the partners of the BLUE DEAL project have carried out their second Testing Lab focused on the possibilities of development and implementation of different blue energy technologies in the Port of Durres, Albania.

BLUE DEAL labs are designed to have two components: a Blue Energy planning session to develop the possible solutions for the exploitation of marine energies in the study area and an open innovation session thought to involve SMEs and other companies, with a problem-solving approach that brings together challenges and proposals for the development of these technologies.

In that sense, during the event Albania's wealth in renewable energy sources with hydropower as the main source was highlighted; also is observed great potential for electricity generation by Offshore Wind and by wave energy harvesting.

As a part of the BLUE DEAL project, a catalogue of blue energy technologies has been developed, selected, and classified into three main groups: On-shore, Near-shore, and Off-shore that can be implemented in the Mediterranean area.

Also, a Geographic Information system was used to make a preliminary assessment of the possibilities of Blue Energy deployment off the coast of Durres. Out of the 11 BE technologies that BLUE DEAL is considering, 7 of them show to be suitable to be implemented on the Albanian coasts; and some of them may require “only” additional cost to develop a demonstration project.

For example, regarding wave energy, there is suitability for oscillating water columns, on-shore floaters, sea-bed based buoys, and oscillating buoys. There is also the possibility to harness wind energy using off-shore floating turbines. Finally, also heat exchangers can be used and marine biomass harvested.

So that participants and the general public can get an idea of the visual impact of the different technologies, their proposed location, how they work, a 3d modeling tool has been developed that allows it to be shown animatedly. This tool has aroused the interest of the public, who also participated in a survey on the importance of the visual impact of these technologies.

The planning part, problems and the environmental impact that the implementation and use of these technologies could have as well as possible solutions were also analyzed.

The second day of the event has been more focused on projects that are already being carried out in the target area. Several Albanian companies as EECG, Infra-Plan, and AED made known the energy and environmental situation of Durres and their development plans.

Furthermore, the Valencia Port Foundation, which manages the fifth busiest port in Europe, shared with the attendees the strategies they are carrying out to become a connected, efficient, responsible, and zero emissions port.

A representative of the past Pelagos project, now involved in the BLUE DEAL project, presented the be-cluster platform, a tool to accelerate the development of the blue energy sector in Mediterranean coastal and also Valencian Institute of Business Competitiveness (IVACE) presented the EEN platform, the world’s largest support #network for SMEs with international ambitions. These two platforms could be strategic to encourage and foster the implementation of Blue Energy in the MED Area.

To end this second Testing Lab, the EU funding possibilities in the energy sector were presented as well as the 1st Business Forum which will take place virtually on November 11 within the Circle the MED event.

More than 70 people have attended this event conceived to increase the knowledge related to the possibilities of generating energy offered by marine energies in addition to constituting a meeting space between SMEs, Public Authorities, knowledge institutions, and civil society.

>>> If you missed the event you can watch the VIDEO here

On June 16th the first virtual testing Lab has been focused on Malta; 37...

All news
Back to top